Blood for the Blood God!!

Wow, it's been 2 months since my last post! Apologies to my readers, but all kinds of real life issues got in the way of my painting and blogging, especially a nice water leak and the subsequent discovery that my shower had been leaking for some time without our knowledge and thus had to be replaced, along with the bathroom floor! Yeah, the joys of owning a house. Anyways, I shall not bore you further with such trivials (but oh so expensive) details of my life, so back to miniature talk. 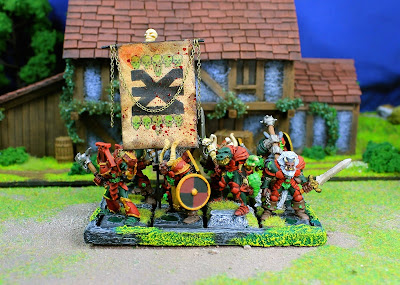 So after working hard on the undivided troops, it was time for a first diversion and so I started working on some Chaos God's specific units. The first such regiment is a unit of Khorne warriors; crazed and bloodthirsty warriors who like to kill, maim and spill blood. As a child Khorne was my least favourite Chaos God, mostly because I thought he was too "cliche", too easy. But when I started collecting back the Champions of all four Gods, I gave Khorne figures a second look and they quickly grew on me. I especially like the figure I used to represent my Champion, Arkil Gorefury (the one with the juggernaut head obviously), he's a fantastic figure (although they are all pretty awesome). 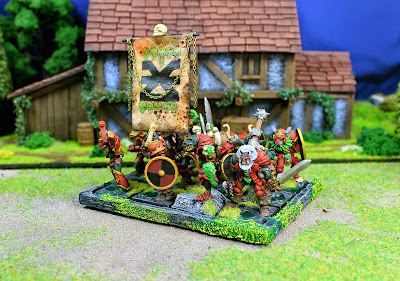 The unit is made-up mostly of Khorne champions designed by the master Jes Goodwin in the 80s as part of the massive and now iconic Citadel Realm of Chaos range. There is also a few Citadel chaos warriors (and a single Marauder chaos warriors) from the same era which style fitted Khorne and which I really liked, like that crazed cleaver wielding warrior in the last row. I wanted a unit clad in dark red, and I had to experiment a lot to find the perfect recipe, red being a notorious bitch of a colour to paint and highlight well. To blend the unit with the rest of my army,  I went with dark green as a secondary colour, and picked details in the "poison green" (bright green) which I have use throughout my Chaos force. I also got to experience the forgotten joy of ranking-up a unit made-up of mostly champions. The current set-up is the only one that works! I painted these guys in small batches of three, since they are unique and characterful sculpts which don't lend themselves well to mass production.

I chose to give the warriors without helmets African skin tones; I thought it worked really well with the look of the unit and colour scheme. It also happens I recently discovered, while painting a biblical army, that I really enjoy painting black skin!

The standard bearer is a conversion, I cut the sword he was carrying and replaced it with a pole. I'm quite happy with the whole figure and the standard; I haven't painted a standard in literally 20 years and mostly I got the bloody and dirty look I wanted. In my youth I wanted to use chains to decorate my banners like I would see in White Dwarf but never did it, so 25 years later I did not miss that chance! I find it looks as good as it did in the 80s!

This regiment should look pretty good as elites in my Chaos army, and they were well worth the effort. They look much better in the flesh too, damn red is also a pain to photograph right!

Yesterday I started cleaning and assembling a very special unit. Call it unfinished business...the Piece de Resistance of my army.  And I'm going to take my sweet ass time on them!
Posted by Iannick at 10:31 PM 12 comments: