More Heresy, different scale (and how Wargamers are awesome people)

For others, the Great Crusade ended long ago. For us, it will not cease until all the worlds of Mankind are united once more and the Emperor's golden age returns.

One of the best thing about this hobby is the friendships you make along the way, and the camaraderie that ensues. Last year, during the Analogue Painting Challenge, I helped Greg with a future Oldhammer Empire army project he was working on, by sending him some figures and helping him out with some questions he had. I had previously used Greg's knowledge of everything Epic/Horus Heresy to help kickstart my own Epic project and I was glad to return the favour, and fantasy Oldhammer is certainly one of my specialty! So I told him I would send the figures right away and we could work out a payment arrangement later.

Greg graciously offered to pay me back by painting service. A few options were on the table, including some Epic, but I decided to go with 28mm 30K figures, provided by Greg (apparently he has a gigantic hoard of Heresy marines!). These will fit nicely if I ever want to play some smaller Heresy action, and since I didn't see myself painting both sides of that, it seemed like the best option.

To make things more interesting, I sent him the following request :

"So you can paint for me a unit of Marines in Mark IV armour. Here are the restrictions :

- You get to decide the Chapter, between Blood Angels, Imperial Fists, White Scars or Salamanders.
- I don't want to know in advance. I enjoy surprises, so I only want to see them when they are finished, either in pictures, or when I open the package.
- My only colour request : if you pick Salamander, make them a somewhat bright green.
- Remember or write down the recipe. If I need more we'll find another deal for you to paint a few more for me"

I'm a sucker for surprises, and I also wanted to let Greg have some fun with this. He's the 30K specialist, so I was really looking forward to see what he would come up with.

The box arrived at my place yesterday, and I was floored by the quality of the paintingb once I opened it. Inside the box there was a hand written note (how rare is that nowadays) from Greg explaining his choice and all the extras he had put into the squad.

So before I go into the details, here is the Squad of the VIIth legion, the Imperial Fists, that Greg painted for me. It is a veteran squad of 10 in Mark IV armour :

Aren't they awesome?! I think Greg did a fantastic job! I was expecting Salamanders or Blood Angels, to be honest, as the other two seemed to be the most difficult to paint (yellow and white are usually not a painter's favourite) so I was super happy when I tore the first bubble wrap and I could see some yellow! Of the four choices, they were probably my favourites. Greg mentioned in his letter that he actually painted this chapter to see if he could manage the yellow. I can confidently say he managed all right!! 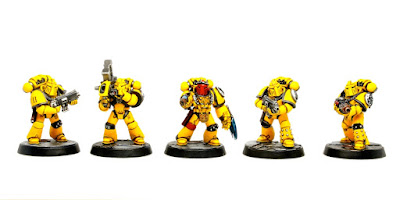 These are GW Mark IV plastic models but Greg really went the extra miles by using many upgrades from Forgeworld, like Mark III helmets, shoulder pads and decals, as well as basing them on GW new urban base. 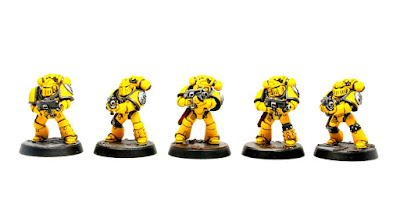 I'm hoping these are just the first squad of a small Imperial First force in 28mm (and yes, Greg wrote down the exact recipe for painting these, as requested).

So yeah, super happy with this deal, and a reminder that people in this hobby rock!
Posted by Iannick at 5:18 PM 10 comments: