A goal without a plan is just a wish 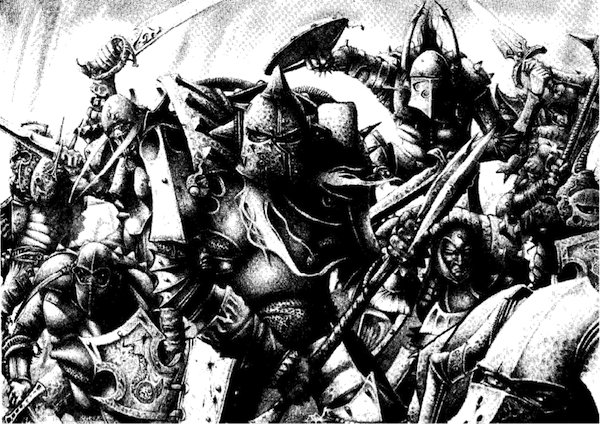 When I decided to go back in time to my Warhammer days, the choice of a Chaos army was obvious. It was THE army I wanted as a child, and I spent more time reading and re-reading Realm of Chaos than anything else related to Warhammer.

I like to plan. Not in every details, mind you, but I like to have a good idea of where I'm going. I think it's a side effect of my youth, when I used to do the opposite!

I had two main goals for this project; first to build a gameable Chaos army of minimum 3000pts, and the second to paint and assemble a variety of Chaos troops and Monsters so that I could play some Warbands using the Realm of Chaos rules. I would love one day to be able to start a Warband campaign, and own everything the dice could come up with! Well, that's somewhat of a dream. Back to reality.

However, the same questions which haunted me as a child quickly reared their ugly heads; what type of army? Which god(s) to represent? What colour scheme? and, a new question, an army for which edition? I don't know about you, but I can spend hours and hours agonizing about these choices, usually while trying to go to sleep!

Lets start with the beginning shall we? Which Chaos god? I like the 4 Chaos gods, always did, but I think that, like most Chaos Lords, I do have my favourites. In order of preference, I'd say my favourites are Slaanesh/Nurgle (ex-aequo), Khorne and Tzeencht. To be honest if I could I'd build an army of each! But that might be costly and somewhat time-consuming! So after some thought I came up with an idea; to first build a Chaos undivided army. Other than the fact that Chaos undivided has a charm of its own, it allows for more creativity and artistic license, I find. An army of Chaos is not limited by the traditional colours connected to the Chaos Gods. My cunning plan was to then paint contingent of the 4 chaos gods which could just be added to my "basic" chaos army to create variety.

Plans, no matter how cunning they appear at the time, are meant to be changed, however, and this one is no exception! After a lot of thinking in the last year, I decided to collect and paint two armies of Chaos; one dark and brooding undivided force with a strong Nurgle flavour and a Khorne contingent, and one colourful, diverse, and gloriously pastel Slaanesh and Tzeentch force. I just couldn't match those two styles in one army. The first army will get the Chaos Dwarfs, the other the Dark Elves, etc. Added bonus; it will allow me to play RoC games. Now of course I won't do all this in one go, and after I finish my first Chaos army I intend to move on to greenskins before coming back to the pastel fields of Slaanesh & friends.

So the first army I wanted was to be a dark, old school (as in Warhammer armies/WHFRP) looking Chaos army. A undivided core surrounded by Nurgle and Khorne followers. I figured my warriors would be clad in blackened armour, and that I would mostly avoid garish colours. I needed a colour to bind everything together, and I settled on various bright greens.

In my youth, I would carefully create a 3000pts army on paper and then slowly try (pitifully) to build that precise force. Lets just say I've wisen up since then! I want to have a diverse force, bigger than 3000pts, so I can pick and choose before a game and keep things interesting. There is also the matter than I want to make my army playable not only for the 3rd edition, but also in more recent editions, mainly the 6th (which I prefer when I just want to play a quick pick-up game without a GM). The more recent editions usually require bigger units, so I will need to take that into account, amongst other things. But one detail is of the utmost importance; what matters is the look of my force, to enjoy painting it and to have fun. I'm certainly not into combos and creating the most powerful army!

So I came up with a "mandatory nucleus", i.e. a core of troops I cannot do without and that I have to build before going into all the extra fluff, and believe me there's a lot of possible extra fluff in a Chaos army! So here is that core :

I figured this was a nice core, easily adaptable to many editions or other rulesets (the heresy!). It gave me something to strive to, both in terms of painting and collecting. Otherwise it can be easy to get lost in the myriads of options available, and it can also be easy to spend your money all over the place, and ending up not having enough of this or that troop when you're ready to paint them.

So I planned that core a year ago, and one Jabberwock excepted, I've stayed fairly loyal to the plan :

- 1 mounted Chaos Lord
- 2 Sorcerers, with chaos familiars (hey, you either do Old School right or you don't do it at all!)
- 6 Trolls (almost done...need two more)

I'm currently working on the unit of Chosens and the 2 sorcerers are almost complete. So yeah, all in all I've been fairly organized and rigorous for a Chaos follower! Once this is done, I'd like to add a few monsters and some Khorne and Nurgle "specialties" (Juggernauts, Nurglings, etc.).

Email ThisBlogThis!Share to TwitterShare to FacebookShare to Pinterest
Labels: Chaos

Fear nature's wrath, for it has the eternal strength of stone and the endurance of mountains

Something a tad different today, as it is neither Chaos nor Citadel/Marauder. It is my entry in the Classic mini Painting Challenge of the Old School Miniatures Facebook Group. At first I thought of entering a Chaos Champion, but the group is more oriented towards the other Old School manufacturers (Grenadiers, Ral Partha, etc.) and I wanted to find something to match that. While looking through my old lead pile I found a Ral Partha Earth Elemental, a sculpt I always loved but was always a bit intimidated to paint. Perfect opportunity, I thought. 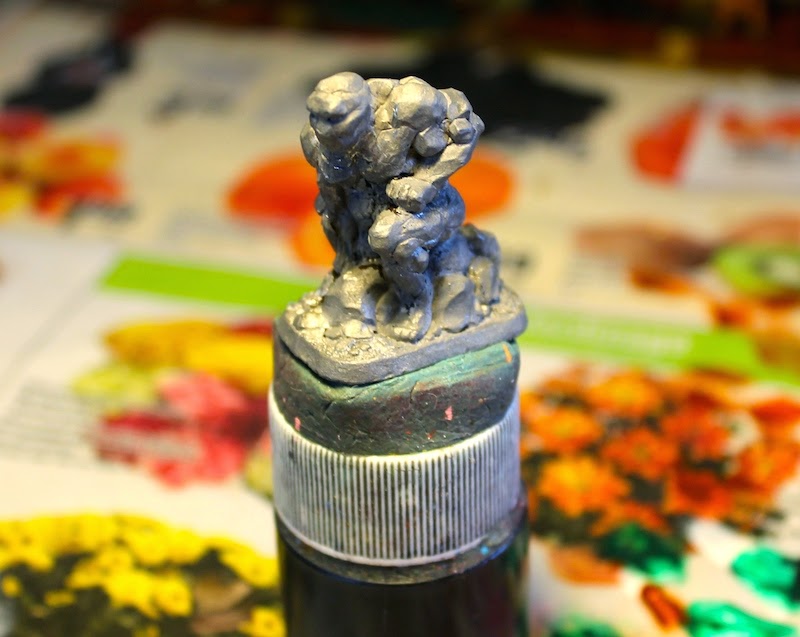 I procrastinated a bit however and started the project two days before the dealine, so I worked really hard to finish him in time. Actually I finished him 15 minutes before the dealine! Just like my College days, I do awesome work under pressure!
It was a somewhat difficult piece to paint as it's one solid block of stone, so I really had to get the stone look right, because there's nothing to hide it if done wrong! However, I felt that the figure definitely needed some foliage so I added moss to the figure using greenstuff and sand. 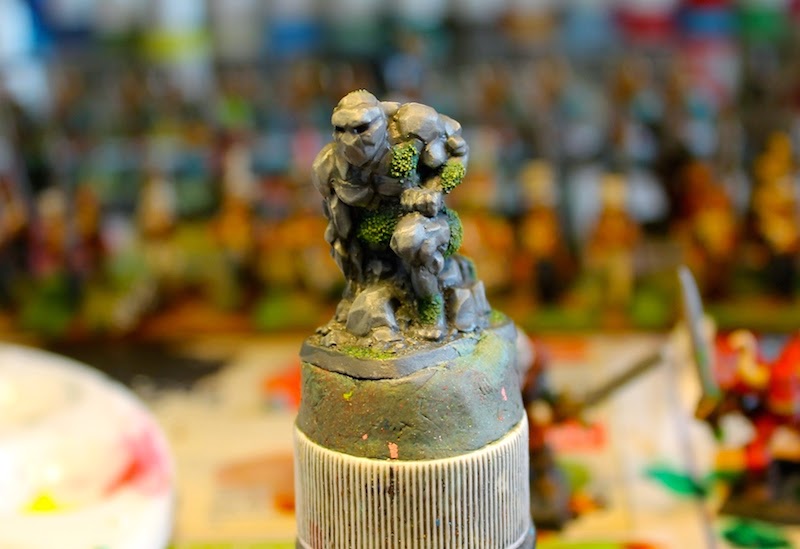 The figure could be a tad bigger, and I really wanted him to look mighty and powerful, so I worked extra hard on making a base worthy of its power. I used this as an opportunity to experiment with cork tiles to simulate rocks, something I learned just recently from Rusty Gouldman from the Facebook Oldhammer group. I wanted to make it look as if the creature was surging from a mountain top, and I must say I am very pleased with how it came out. 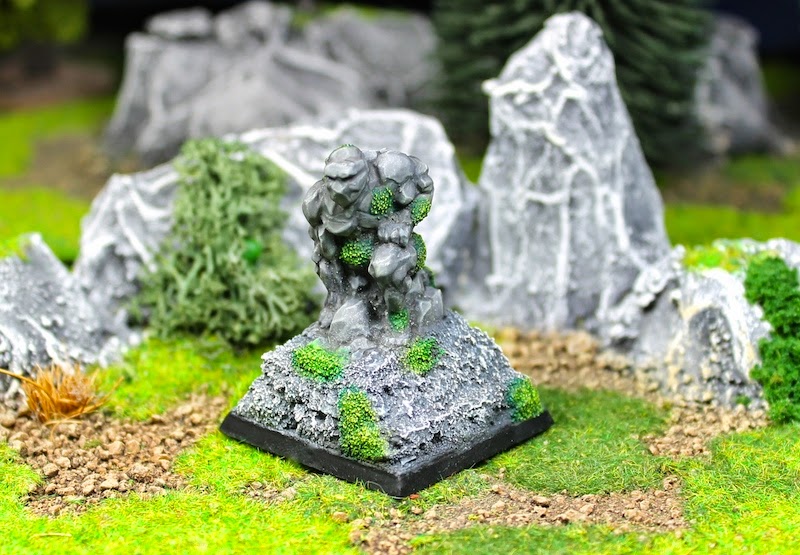 This figure is my favourite elemental sculpt ever and I have every intention of using him eventually in future Oldhammer games, when I have an army of good guys. Some may not remember, but Greater Elementals (level 10) were one of the few creatures able to stand toe to toe with Chaos Greater Daemons in Warhammer 3rd edition. These things were uber-powerful! 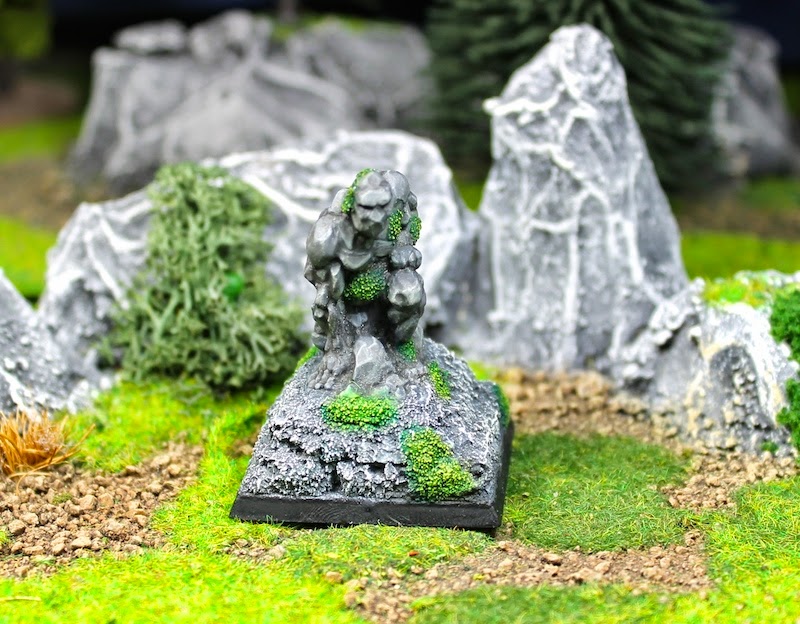 I always loved that nature itself when pissed enough could give Chaos a run for its money. That's just pure Old School fantasy. 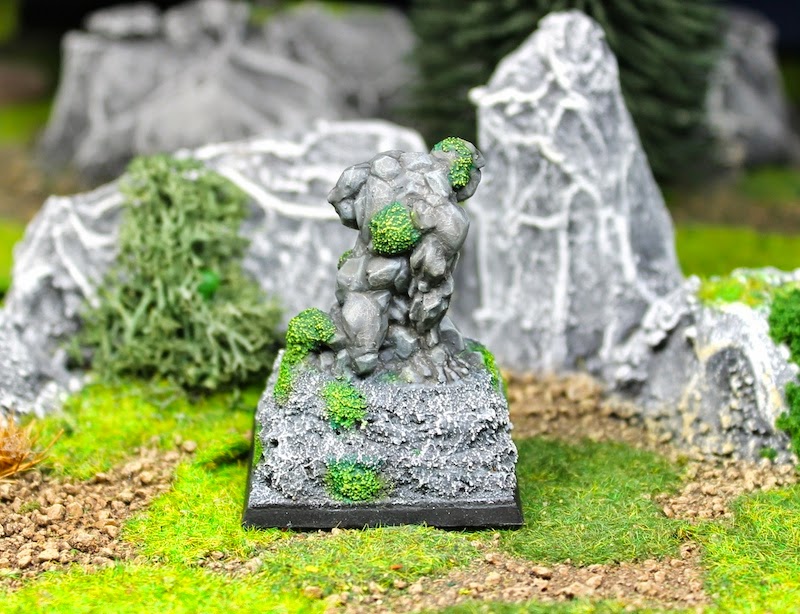 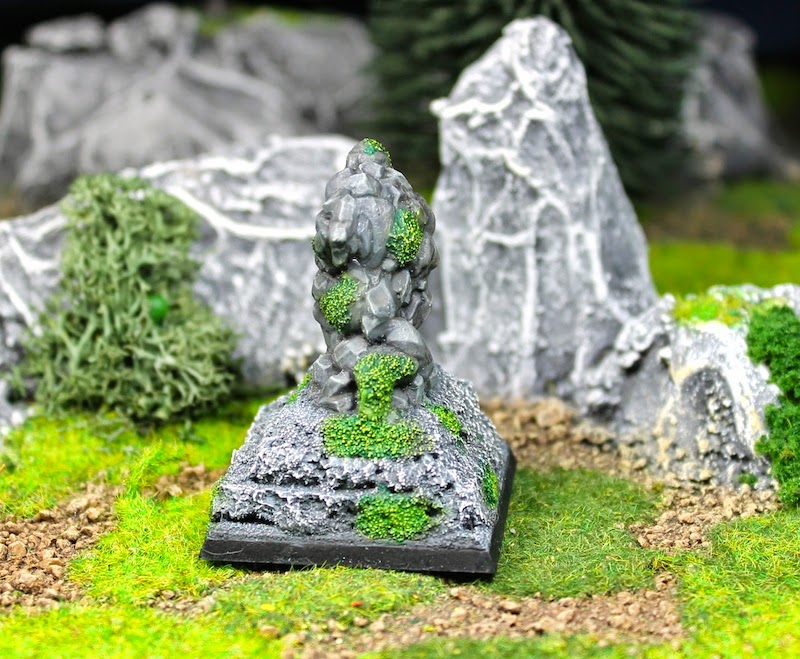 Posted by Iannick at 7:42 PM No comments: