So the first part of my November entry is a regiment of  19 Forest Goblin archers, led by Noraz Stickblast, a Goblin Big Boss.

I must admit painting these fellows in a month has been a challenge; first because work has been very busy, and also because I didn't expect these guys to take that long! I mean, they're small, so they should paint faster, right? WRONG. I never noticed the insane amount of details goblin master Kev Adams had sculpted on these little fellow. Skulls, spiders, ear rings, bones, feathers, etc. He even sculpted them nails! These are not your typical clad in black night goblins. And at a mere 2.5 pts each, it probably makes them the worst deal in Warhammer history when it comes to bang for your painting time!

But boy, do they look great once finished. The Kev Adams 4th edition gobbos are (by far) my favourite goblins, I love their look of mischief rather than pure evil. They are exactly how I envision Goblins.

It was my first time painting greenskins since, oh, 1993 or so, so I had to come up with a green recipe. I always liked my goblins to be a very bright green, and I'm really pleased with my results! As for the colour scheme, I went with a trio of bright colours in yellow, red and orange. I always like bright colours when I can get away with it, and I also wanted to give a nod to the "red" era when these figures came out. I also like to use a limited palette when army building, so I used browns and bones for the rest of the details, so to keep the attention on the bright green of the skin and the trio of hot colours.

My original idea was to include war paints on the rank & file, but time constraint (and the fact I would then have to do the same on hundreds of other goblins) changed my plans so I only painted them on my Boss and the musician. It's probably something that I will keep doing on the rest of my army, i.e. limiting war paints to royalty and command figures.

Now, goblins being goblins, the little bastards cost litterally nothing, so that whole unit, with a Big Boss, doesn't even reach 100 points!

So here comes the second part of my entry...a Doom Diver!! If I'm really excited about this it is because I absolutely love everything about Doom Divers; it's such a perfectly stupid goblin war machine, it fits so well with the Warhammer goblin fluff, and the 4th edition model is just so cute and charming! 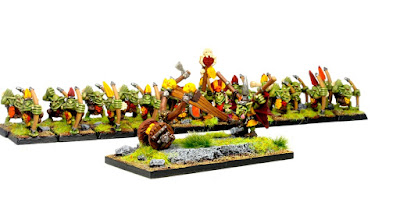 I gave him the same colour scheme as the rest of the force (when you kamikaze yourself, bright colours are in order!) and I decided to put him on a nice, big base. I'm not a fan of separate bases when it comes to war machines, and I always prefer to build dioramas and such. I like him a lot.

I've been involved in Oldhammer, and it's awesome community, for around 4 years now. Now I won't bore you with my tales of nostalgia, although should you be interested you'll find it in here. My first love was Warhammer 3rd Edition, and the Realm of Chaos books. So when I started my Oldhammer collecting, and then painting, my first target was a Chaos army. But while I was building that army, my collector's sight were already fixed on amassing my second dream army; Goblins! For you see Warhammer 4th edition came out shortly after I started the hobby, and my White Dwarfs were rapidly inundated with pictures of Kev Adam's wonderful sculpts of those mischievous green creatures. To this day I've yet to find another range that embodies how I see Goblins; evil yes, but also incredibly stupid and yes, kind of cute. Basically, I like my goblins more on the mischievous side than the pure evil side, and Kev Adam's 4th edition Goblins are exactly that.

But in the early 90s, while I was dreaming about building a Goblin army, the sad reality was that in was just that, a dream. In 1992-1993, I was but 13 years old, and a goblin only army was extremely expensive. Other than the plastic night goblins archers and the goblins spearmen from the boxset, all goblins available were in metal, and you needed hundreds of them! In those days the little guys were sold in blisters of 4 IIRC, so it was simply an impossible mission for a young boy with a 20$ bi-weekly allowance! I did buy many blisters actually, but it was a drop of water in the ocean!

So around 3 years ago I really started to collect a 4th ed Goblin army. And boy, it wasn't easy! One of the great mysteries of Oldhammer is, to me, the rarity of metal goblins and their prohibitive price on Ebay. So I was patient, waited for big lots, and when the big lots came I was as rutless as they come. THEY WERE MINE, ALL MINE! I was especially interested in the forest goblins, my favourite, and the classic goblins. If you haven't noticed yet, my thing is goblins, I'm not a huge fan of Orcs. A necessary evil, at most. 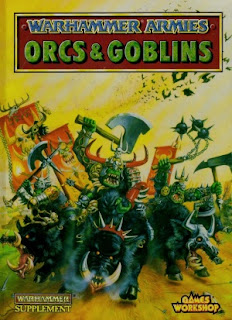 So between trading pages, Ebay and my old original stock I did managed to assemble a vast collection, one that I'm especially proud of. But the collection's been ready for over a year now and I procrastinate and procrastinate. Why? Well I'm a bit afraid of the sheer numbers of figures I'll need to paint.

So when I was challenged by my good friend Chris to create the OWAC, I knew the time had come, and that I could hide no more! The goblins were calling me, waiting to be unleashed upon the world, to swarm their enemies (Greg, Chris, I"m looking at you), to conquer...ok, ok...they are still goblins so conquer is a tad exaggerated. Annoy might be more exact.

Anyways, I talk too much. Let's have a look at my complete Orcs & goblins collection, and my plans for the next 6 months!

When the Challenge started, I decided to make a complete inventory of my collection. Here it is : 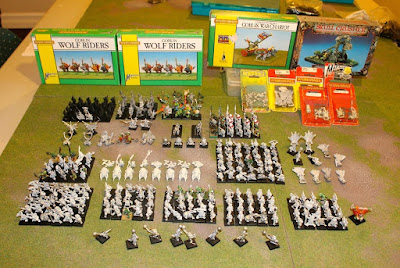 As you can see the majority of the collection is made-up of forest goblins and goblins, with some Orcs and night goblins. The vast majority is also from 4th ed, although I do have some Marauder orcs and goblins, and some really Old School Ogres.

From that I just had to come up with one 1000pts worth of Orcs & Goblins. Since I had enough of the little fuckers, I decided to go with an all forest goblins force (well, almost). More figures to paint, sure, but oh so more rewarding! Not to mention fulfilling the dream of my 13 year old self! Obviously, in this case I used the 4th edition Orcs & Goblins army book. Too many troops were not present in the 3rd edition (forest goblins, Doom Divers, etc.) Although ironically I do not play 4th, so I intend on building a custom list eventually for 3rd!

So here's my list! I'm around 70 pts short, which I will use for either more goblins, wolf riders, stone lobbers or orcs, depending on my mood.
Total : 927.5 pts

Of course I reserve the right to make changes as I go! But I do enjoy making lists, it's great for planning. The Challenge states that we must paint 200pts per month, and I believe I have a good mix of units, war machines and characters which should allow me to reach that goal while still having fun.

Visit the Old World Army Challenge blog to read the projects of each of the other 36 members!
Posted by Iannick at 12:29 PM 11 comments: