On one foot you limp; on two feet you sprint.

I finished two Epic models in time for the end of the painting challenge.

First was the "Curtgeld", which is the price of admission into the painting challenge. Every year, we must paint a figure related to a particular theme for Curt's, the organizer of the challenge, collection. This year, the theme was cooperation and teamwork, so we had to submit a collaborative piece or entry. I got together with Greg, fellow canadian, enthusiastic wargamer and hobbyist and the man responsible for my Epic projet.

When Greg and I discussed our ideas for our all-canadian Curtgeld, our first ideas was Napoleonics, but we figured many would obviously go down this route, what with Curt"s obsession with the era! So I proposed a somewhat crazy ideas, which I figured we might be the only one to do; both of us painting the same figure. And in the spirit of the recent Epic projects, by me and Greg, but also by Curt with this Adeptus Mecanicus project, we settled on a Epic Warlord Titan. 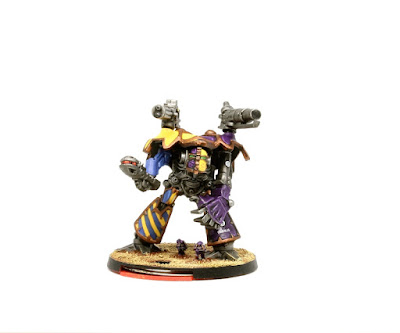 So Greg painted the metal works and half of the Titan (the purple parts), and then send it to Montreal for me to do my half (the blue and yellow parts), and I was also in charge of the basing and the little add-ons like the Marines on the base. It was, for me at least, the very first time I work on a model that someone else started! I have to admit, it was a bit more difficult than I anticipated, as I was afraid to accidentally touch some of Greg's painting, which would be a much bigger problem than when I can easily retouch my own work. 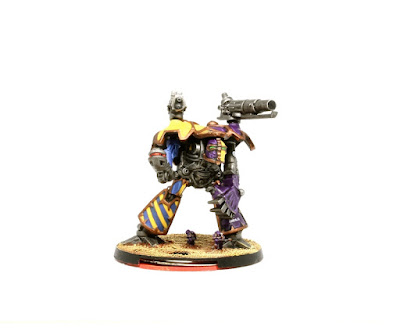 The Warlord-class Titan is a large and powerful type of Battle Titan, armed with much more firepower than its counterpart, the smaller Reaver-class Titan. The Warlord is the most common class of Battle Titan in use by the Titan Legions during the Heresy, and many Adeptus Mechanicus Forge Worlds field their own patterns of this class. Due to their immense size, Warlord Titans are not nearly as fast or agile as the Reaver-class Titans or the Warhound Scout Titans, but they more than make up for this failing with their sheer firepower and heavily armoured bulks. This thing is big, this think is massive, this thing will blow shit up! 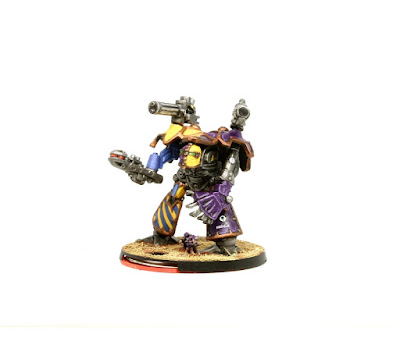 This model is straight from the early Adeptus Titanicus boxset of the late 80s, one of the multi-part plastic models from the game. We kept it old school, even including the void shield wheels in the base. I included a few Space Marines on the base to give the model a sense of scale and size. 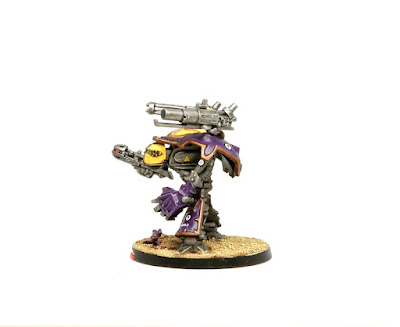 We think this massive war machine will fit in very nicely in Curt's Epic force, even more so since Greg has been painting Titans left and right during this challenge, and Curt will probably need some extra firepower next time he gets to face Greg's legions! 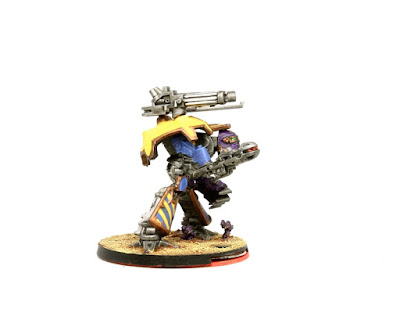 It was not in my plans to paint anything else than the Curtgeld this week-end; I'm really burned out by the challenge. But Curt did last week challenge me to a last second sprint to the end, and I felt I had to give it my best!

So I managed to paint another Epic piece, as my last stand in the 7th Analogue Hobbies Painting Challenge!


How I react when Curt challenges me with one week left to the challenge...

So here is a Legion Glaive Tank for my Emperor's Children force. The Glaive is a super-heavy tank pattern related to the Fellblade, but beyond the obvious surface similarities the two tanks are very different. The reason for this divergence lies with the Glaive's primary weapon system, the fearsome and arcane Volkite Carronade, a massive Volkite Weapon that is capable of destroying enemy vehicles in a single shot. Volkite Weapons produce a deflagrating attack, in which subsonic combustion caused by a beam of thermal energy is propagated through the target by thermodynamic heat transfer, so that hot burning material heats the next layer of cold material and ignites it. The Volkite Carronade used by the Glaive was able to make short work of all but the most heavily armoured enemy vehicles and structures. 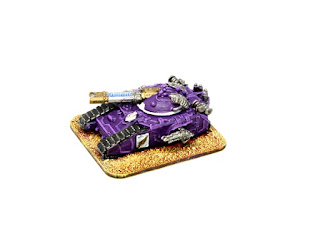 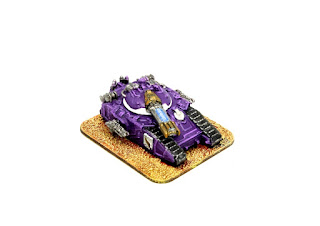 In short, it's a massively dangerous metal beast! I followed of course the painting shceme of my Emperor's Children force, but gave the glaive white details on the turret instead of the gold I used on the Fellblades to make the model stand apart from my other super heavies. I'm not entirely happy with my work on the Volkite cannon, but it will do.

Those two entrys gave me 37 points. The Challenge is now over, I'll do a post detailing the experience, but I'm very happy with my hobby output for these first three months of the year. Even on the Blog front, this is my 14th post of the year, which equals what I did all last year!
Posted by Iannick at 12:48 PM 11 comments:

Hail to the King, baby

Alright you Primitive Screwheads, listen up! You see this? This... is my BOOMSTICK! The twelve-gauge double-barreled Remington. S-Mart's top of the line. You can find this in the sporting goods department. That's right, this sweet baby was made in Grand Rapids, Michigan. Retails for about a hundred and nine, ninety five. It's got a walnut stock, cobalt blue steel, and a hair trigger. That's right. Shop smart. Shop S-Mart. You got that?

When I was maybe 11, I saw late at night a horror movie called Evil dead. It terrified me. So of course I watched Evil Dead II not long after and was also terrified, again. The "humour" in the movie escaped me, and the fact the main hero, Ash, spends a good half of the movie alone, tormented by evil demonic forces really made a number on me. But the worst part was the movie's ending, in which our hero gets propelled back in medieval times, not the happy ending you want for your horror movie.

Lady, I'm afraid I'm gonna have to ask you to leave the store.
And who the hell are you?
Name's Ash. [cocks rifle]
Housewares. 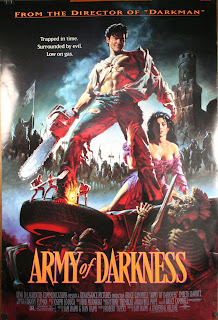 Two years later, I saw a commercial for Army of Darkness, and I realized it was the sequel to Evil Dead! Finally I would knew what happened to Ash! As I was 13, and the movie was PG-13, I went to see it in the theater. I quickly realized that the sequel was much more lighthearted than the original, and while for a moment it disappointed me I rapidly fell for it's humour, and laughed for 90 minutes straight.

You found me beautiful once...
Honey, you got reeeal ugly!

To this day, Army of Darkness is one of the movies I've seen the most often, and I can recite most of the movie lines by heart. And they're so many classic quotes in that movie!


I got this Hasslefree miniatures a while back, because obviously as a die hard fan of the serie I needed it, and obviously when I saw the last bonus round theme (TV or movie character) I knew what I had to do! At first I wanted to do a diorama, but after painting the figure the wargamer in me whispered to my ear "you'll want to play with him, are you sure a diorama is a good idea?" That combined with lack of time as I've been working really hard on that Pulp duel with Sander made me decide he would be enough. And who am I kidding? Of course, Ash is enough! 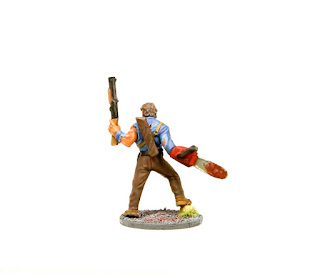 I intend to use him in Pulp games, and also of course Zombicide! And who knows, Oldhammer maybe? It's a great figure, and I'm really happy with my painting.

Sure, I could have stayed in the past. I could have even been king. But in my own way, I *am* king.
Hail to the king, baby.

Why not, hey? In what is quite possibly my last Halflings of the winter (and challenge), here's another batch of 5 of the little fellows, and it includes some of my favourites, as today we have a berserker, a Wizard, a Honey Mage, a General and a Psion.

The Berserker is one of my favourite sculpt of the range, and I gave her the fiery orange hair of her fanatic Dwarven cousins, Slayers of Trolls. I'm also very pleased with the wizard, as I'm really happy with my painting on him, especially his flaming hands, which I think I nailed. And one cannot not talk about the Honey Mage! It make so much sense that Halflings would've come up with a school of magic that gives them unlimited honey! I love the bees all over her, and the honey dipper wizard staff is a seriously nice touch.

I had a LOT of fun painting all these Halflings; so often the subjects of our painting is serious, with monsters and wars and such, that this was just a very refreshing little project. However I believe these will my last of the winter as I'm also working on a side duel due for early March (it's coming Sander, no worries. It's gonna be awesome) and I would like to add a few pts to that 30K duel. I did managed to paint 25 of 'em little fellows, and since my goal was between 20 and 25 I can say "mission accomplie". I have quite enough to create a LeafGrave warband, and I even have the choice between three Wizards! So I gather it is time for a family portrait of the bunch.

So that's 25 more points. Now if you'll excuse me, second midnight snack is coming...
Posted by Iannick at 11:46 AM 6 comments: