Guramm swiped the sweat from his forehead; all night he had marched with the remnants of his army towards the holy ruins of Ekrun, deep in the forest surrounding his family's stronghold. Yesterday's battle had been a massacre, and most of his army still lay, rotting, on the field of battle. Soon, he would get to join his fallen comrades and meet Grimnir. But not before one last battle. one last stand..."Chaos has no idea what it is getting into", he chuckled, smiling for the last time of his life.

A few weeks ago Chris (from Blue's Marauding Miniatures) came down from Vermont to help me give Kawe, from Westfalia Miniatures, an Oldhammer style welcome. Kawe moved this past summer from the UK and will spend the next few years in Canada, if we can survive our winters! We settled on a game of Warhammer 3e, and as the host I volunteered to Game Master the game. I wanted to do a game with a scenario (and a surprise!).

The game was between parts of my Chaos force, under the leadership of Kawe, and Chris' stout Dwarf army. We played using 3rd edition rules, and our armies both came from Warhammer armies. We agreed to not have magic, as the game was already complicated enough for Kawe, who hadn't played 3e since the early 90s(!)

The horde of Savalas The Savage 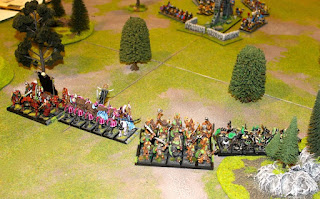 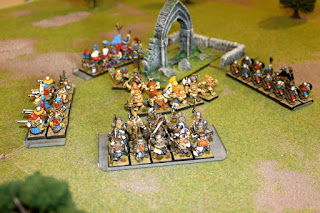 Just a few days ago, Guramm Stonemore’s army was a glorious sight to behold; proud ranks of Dwarfs after proud ranks of Dwarfs, in fine spirit, the army was assembled as Karak Drazh first line of defense against an invading horde of Chaos. Alas, the sheer numbers from the Chaos horde were too much, and the vast majority of the army died on the battlefield. Left with his “arriere garde” intact, Guramm retreats and, hoping to leave as much time as possible for his stronghold to prepare for the incoming siege, the Dwarf general attracts the Chaos army and makes his way for the Ekrun ruins, deep in the forest surrounding his people’s stronghold. He hopes the sacred ruins will boost the morale of his soldiers, and that they will inflict as many casualties as possible before meeting Grimnir in the afterlife.

In this battle a vastly outnumbered Dwarf army must sell the lives of his troops as dearly as possible.

- The dwarfs set-up their army first, in a 18 inch square in the middle of the table, around the ruins of Ekrun
- Chaos then deploy his army; units may set-up anywhere at least 24 inches from a Dwarf unit
- The dwarfs go first
- The game lasts until the Dwarfs are wiped out
- Special rules : The dwarfs expect to die and therefore are immune to panic
- Victory conditions : Calculate victory points for destroyed Chaos units and Chaos units reduced to below half points. If the result is more than the starting point value of the dwarves, the dwarves win, even if wiped out. If it less than half then Chaos win. Anything else is a draw.
- At the start of  the Chaos player’s 3rd turn, the GM must roll a D6, on a roll of 4+ a surprise happens. If nothing happens, the next turn the GM rolls again but this time with a +1 for each roll after the first (so 3+, then 2+, etc.)

There is TONS of pictures, so enjoy! 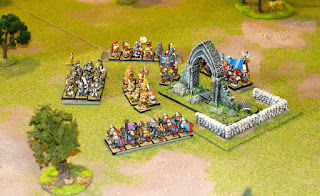 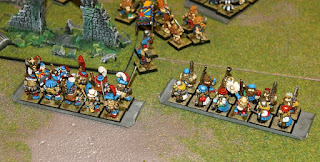 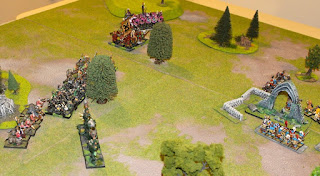 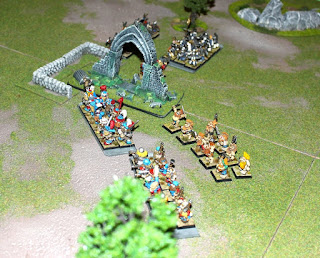 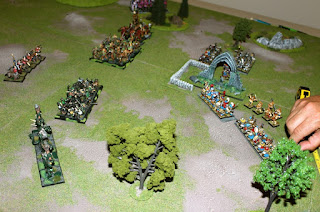 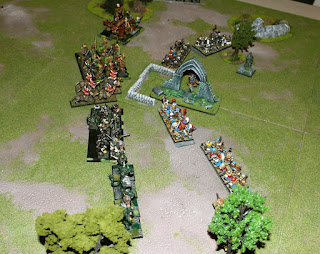 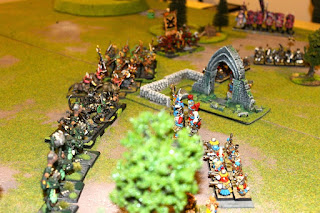 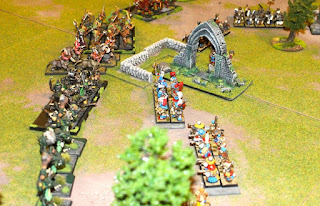 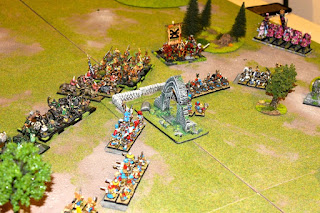